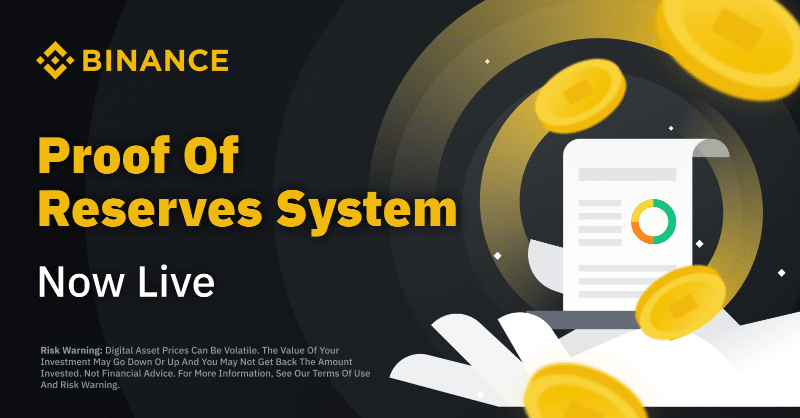 Binance, the world’s leading blockchain and community-driven cryptocurrency exchange company, has released its new site, the Proof-of-Reserves system. Initially, the company is expected to begin with the BTC reserves, which commenced after the collapse of FTX, where the crypto exchange company faced a liquidity crisis and had to discontinue the withdrawals process as it failed to meet the demands of the investors and the end-users as required.

As of now, Binance has reserved an excellent ratio of up to 101%, which clearly states that the company holds enough bitcoins, which can be used to cover all users’ balances. Famous crypto companies have been on the go to offer more transparency about the maintenance of users’ funds ever since the collapse of FTX happened. This led to the initiation of hot and cold wallets, which has not come into effect as of now, as it requires a lot of work to be covered before you can completely trust crypto exchanges and their way of handling of funds.

Wallets Addresses, Are They Worth It?

The provoking thought of hot and cold wallets enabled Binance to share wallet addresses investing billions of dollars worth of crypto assets. With the release of Wallet Addresses, the company made a strong statement and proved that they hold enormous assets, making it easier for them to process many withdrawals. Although no such clarification can state whether they were the user’s assets, Binance’s own balance sheet or a mix of both. But, Binance has clarified its point by saying that BTC wallets which are included with the new proof-of-reserves system, won’t include Binance’s own funds.

“It is important to note that this does not include Binance’s corporate holdings, which are kept on a completely separate ledger,” the company says. You will have to trust Binance’s word, as you can’t verify that with a blockchain explorer.

With the report of 22nd November, it has been concluded that Binance users have collectively held 575742.4228 BTC — which sums up to $9.5 billion in accordance with the exchange rate. Binance has successfully covered enough bitcoins in its own wallet, which would cover near to 101% of the total funds.

Ever since Binance started with BTC holdings, the company has been on the go to make utmost usage of the Merkle tree, often used to encrypt blockchain data more efficiently and securely, which shall include every individual user account to generate a cryptographic seal.

With the help of the Merkle tree, users can use the root hash to keep a check on their accounts easily. For an easier process ahead, the company also provides a short Python script for you to keep an easy check.

“Given recent events, it is understandable that the community will demand more from crypto exchanges, far more than what is currently required of traditional financial institutions. That’s why we’re pleased to provide this latest feature for our users to verify their funds,” Binance founder and CEO Changpeng Zhao ‘CZ’ said in a statement. “As Binance’s user community is exponentially larger than the next largest exchange, this is a massive undertaking and will take a few weeks to develop the data for most of our assets in custody. We are working on getting the next update out as quickly as possible to meet the community’s expectations.”

To streamline the process, the company is already planning to release as similar proof-of-reserve information for ETH, USDT, USDC and more with the hope of covering withdrawals for lesser-known cryptocurrencies.

Established in 2017, Binance is a community-driven blockchain software system trusted by millions worldwide. The company was established in China but moved its servers and headquarters out of China and into Japan in advance of the Chinese government's ban on cryptocurrency trading in September 2017. It contains impeccable features with an unmatched portfolio that intends to put its users as a priority. Binance’s move ahead with maintaining the product suite, which involves the most prominent digital asset required for an exchange. Binance’s mission is to be the one and only infrastructure service provider in the age of crypto.